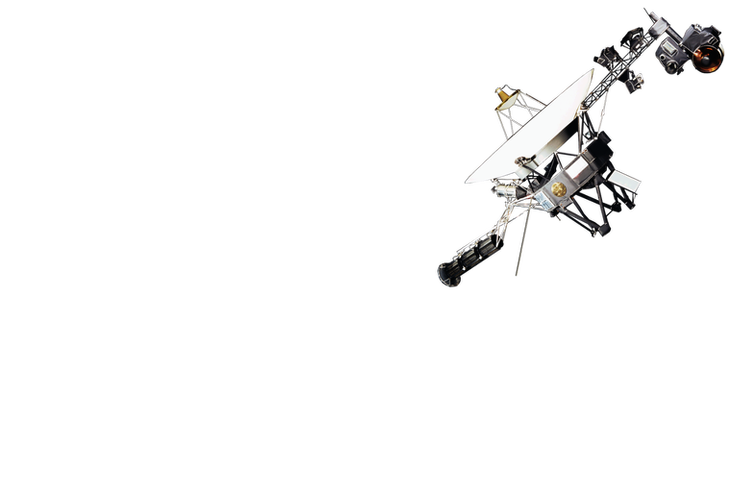 We'd like you and your friends to contribute a suggestion of what it should say.

Your message to the Voyager spacecraft

If you could send such a message about humanity, to be read by an alien civilisation hundreds of millions of years from now, then what would you say?

The Voyagers are a long way from home right now and talking to them, even through NASA's deep space communications network, is quite slow. So you need to keep your message pretty short; just 1000 characters, (about the length of seven tweets) - see the FAQs for more information.

Over 40 years after leaving Earth this spacecraft named Voyager had broken into interstellar space, 20 billion kilometers from its home planet, & was still powered & collecting useful data.

During this time our society had changed significantly, its population doubling to over 7 billion, & the challenges of living sustainably & peacefully together had grown more urgent.

Our technologies had also become increasingly digital, raising our computing capability, pushing the frontiers of our knowledge faster & accelerating our development as a single, interconnected global civilization; with all the advantages and problems that this brings.

With onboard power dwindling, the uploading of this message is one of the last contacts we will have with this spacecraft. We hope that one day, in finding our Voyager, you will know of our existence & our desire, like yours, to explore & better understand this Universe we have shared with you.

With peace & hope from the people of planet Earth.

Why just 1000 characters. Can't Voyager store more information on board than that?

It's true that the Voyagers' computer memories are big enough to store a longer message, and the tape recorders on board could even still (just) be used to store more information. But the data rate that Voyager can "hear" at from almost 20 billion km away, is very low these days and time on NASA's Deep Space Network of powerful communications dishes is at a premium. So the smaller the message, the more chance there is of persuading them to send it.

Will anyone really ever be able to read such a message?

It is very unlikely that the Voyagers will ever be intercepted by another space faring civilisation. Results from the SETI program, which has searched for signs of intelligence technological civilisations in our galaxy for the last 50 years or more now suggest that such intelligent technological life is probably quite rare. But should they ever be found, and the Golden Record decoded and interpreted, then it's possible that their computer memories might also be able to be read by such smart and resourceful enough beings. And should it have survived intact then it's not impossible that it could be read and even decoded and maybe understood.

How long do we have to send such a message before the Voyagers run out of power and can't receive our signals from Earth any more?

It's thought that they will have enough power onboard to stay in contact with Earth until about 2023 - so right now we have about 9 months to persuade NASA to do this.

How long will such a message survive in the memories of Voyager's dead computers?

It's hard to answer that question - but there's no reason why such a message encoded in the spacecraft's onboard computers' memories couldn't last for thousands of years - maybe longer.

Why bother sending it if it's so unlikely to survive or ever be read?

Why not try? Given all the effort which has gone into getting the two Voyager spacecraft to leave the Solar System, why not attempt this final, relatively simple and easy gesture of interstellar communication? Such an exercise in thinking of a short, pithy message which encapsulates how we've changed as a society in the last 4 decades, and what our hopes for the future are, is an interesting thing to do. You can add what you'd like to say to the box below. You can't write more than 1000 characters. So why not have a go yourself.

Will NASA definitely send a final message to the Voyagers?

This is not a NASA project at the moment, but we hope our proposal might persuade them that it's worth doing. With your help maybe that will happen, so please spread the word!

What will happen to any message I suggest here?

We intend to send any suggested messages which are entered through this Facebook app to NASA, in the hope that they might decide to choose one to send. That's our aim.

Voyager 2 flies by Neptune and its moons in November 1989. Voyager 1 takes the 'family portrait' photo, from around 6 billion km, on 14th February 1990.

Voyager 1 overtakes Pioneer 10 as the most distant spacecraft from the Sun, at 69.419 AU.